The current pandemic is like nothing the world has ever seen before. This time last year we were in a very different place. Many people are now questioning whether we are heading into a period of economic crisis reminiscent of the days of the Global Financial Crisis (GFC).

Let’s compare this current Coronavirus crisis to the GFC of 2007/2008. Whilst it is still early days in the current crisis, there are similarities and differences we can make with the GFC.  We believe an investor’s response to these crises should be similar, with the adage “time in the market is more important than timing the market” remaining appropriate. This is illustrated in the following chart; 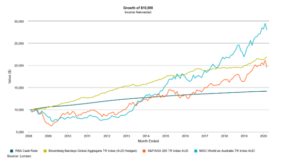 As you can see above, even if you had invested just prior to the start of the GFC in late 2007, in the following years you would have reaped the benefits of a strongly rising market, in both Australian and Global shares (as represented in the chart above by the yellow and light blue lines) compared to holding cash, shown by the dark blue line.

Comparing the GFC and the Coronavirus Crisis

We can draw some interesting parallels between these two crises;

The Government has played a similar role in both crises – most importantly with their stimulus packages. Massive stimulus programs were and are being implemented. The goal is to ensure that the financial system remains working until the crisis passes

What action should you take?

If a vaccine is developed quickly, we may see a strong and fast rebound in markets. If it takes too long and the virus continues to spread, with more prolonged community lockdowns, markets and economies could suffer further pain. It is difficult to predict how long it will take. Understandably, people are worried not only about the health impacts of the virus, but also about the health of their investments. It is crucial to reach out to your financial adviser to have a talk about your situation. Understanding your current circumstances and discussing these with your financial adviser gives you the best opportunity to ensure that when this crisis passes, as it did with the GFC, your portfolio is positioned appropriately to provide for your future goals.

If you have any further questions, please contact our office to discuss