Shares Climb a ‘Wall of Worry’ – but is it sustainable?

After a roughly 35% plunge from their February high point to their lows around 23 March on fears regarding of global recession on the back of the coronavirus shutdowns, share markets have since rebounded sharply, led by US shares. The rally has pushed the Australian ASX 200 back through 6000 for the first time since March.

A common concern is that the rebound in share markets is “too optimistic” and “irrational” – how can share markets rebound so rapidly when economic conditions are so weak, coronavirus uncertainty remains high, the US is seeing civil unrest and US/China tensions are rising? I must admit that I have also been surprised by the speed of the rebound and think maybe the markets are ahead of themselves. But I have seen this happen before and it reminds me of the quotation from the investor Sir John Templeton “bull markets are born on pessimism, grow on scepticism, mature on optimism and die of euphoria” as this rally has occurred against a lot of pessimism with shares climbing a wall of worry. But as the quote reminds us, that’s what they often do. The plunge in shares into March led the coronavirus hit to activity & fear of recession on the way down and in the process surprised many at the severity of the fall and now it’s led on the way up despite still lots of worries.

Key drivers of the rally

So what’s driven the rally? In early April we listed signposts to watch as to whether shares have bottomed. The key signposts are updated in this table. 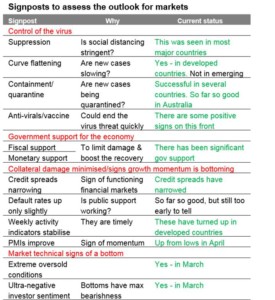